“I like toast.” This is what my t-shirt from Bainbridge Island’s Blackbird Bakery says. Is that what I was thinking of as I researched yaks, representing the “Y” letter in the 2015 Felix Kulpa show?

Yaks are interesting creatures, not from around here. They are small, sturdy and shaggy. People put saddles on them, milk them, make clothing from them, and eat them. They have a distinctive back hump, and at first glance, I thought it looked like toast coming out of a toaster.

So I moved forward, shaping the form and character from:

1.  A redwood fence slat,
2.  Stubby tool handle legs, sanded to reveal dark uneven texture, with shaped hooves,
3.  A carved redwood head,
4.  Horns courtesy of the two handles from a pair of pliers that an Open Studios visitor brought me,
5.  A paintbrush tail,
6.  A heavy chain for leading the yak,
7.   A nose ring not thrown at the Boardwalk carousel’s clown, and
8.  Two pieces of redwood toast.

Not only do I like the juxtaposition of two very different things – a massive, dense yak and a light, airy piece of toast – I like humor and visual puns, and making secret, hidden elements not easily seem. Similar to a secret compartment on an old roll top desk, I have made a number of animals that have a funny or secret compartment – like the drawer filled with cigars that replaced the pouch on my kangaroo, or the vulture make out of an old recipe box that contained a flattened cloth “road kill” (currently on view through August 2015 at the County Government Center).


The secret compartment on my yak has two slices of toast AND painted yellow heating elements – it wouldn’t be a toaster without them! See it in person at the Felix Kulpa Gallery through July 26th. 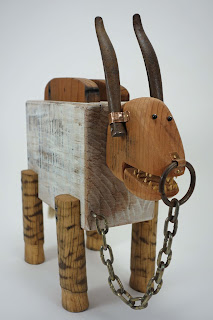