My attraction to monkeys began early in my childhood. I loved Margret and H.A. Rey’s Curious George stories, and I envied his tiny suitcase that he carried everywhere containing all of his important possessions. When I was about 8 years old, I got to meet some real life Curious Georges. My father was employed at Western Michigan University in Kalamazoo as a behavioral psychologist, working with animal subjects. He worked with white rats, but his colleague, Dr. Gault, worked with rhesus monkeys. My father would take me along on an occasional weekend task and I got to visit the monkey enclosures. They were always so excited to see humans approaching and their energy and loudness was both scary and exciting. I got to feed them biscuits from large Purina Monkey Biscuit bags. Tiny fingers held out the treat and tiny fingers accepted. I begged to have one of these monkeys as a pet, but my dad concluded that our big old house on Oakland Drive was not big enough for our growing family and a monkey, too.

Western Michigan University also gave me another unexpected, but delightful monkey treat. WMU housed a wonderful experimental teaching school, preschoolers through high school (you could go from preschool to a Ph.D. all in one place!), which I attended since my dad worked there. At one of the yearly children’s book fairs, I got to actually meet Margret and H.A. Rey.

Monkeys are one of my very favorite animal subjects. They are elegant in their simplicity, like real monkeys, and each has a definite personality.

A few components of my monkeys are: 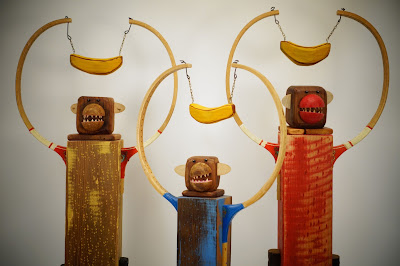 Posted by Unknown at 8:36 PM No comments:

"This was no boat accident!"

You might recognize that famous line fine from the movie Jaws. Well, this will not be a story about great white sharks in Michigan (there aren’t any) if that’s what you are thinking. Each summer, my father, a college professor, would load up my mom, older sister, younger brother and me, and we would go on a summer-long adventure. In 1975, the year Jaws came out, we were on the east coast, first in Lewes, DE, and then in Cape Hatteras, NC. In Lewes I spend countless hours riding a bike that belonged to the lodge where we stayed; there was no TV and not much else to do. It was in Lewes, in a tiny old movie theater, that I first saw Jaws. It made a big impact on me; I was both terrified and fascinated.

After Lewes, our next stop was Cape Hatteras, which is on the open ocean. There I spent countless hours walking up and down the beach and swimming in the surf. One day, a pod of dolphins were spotted swimming north just off shore. Of course everyone thought they were great white sharks and quickly got out of the water! We waited there trembling until someone produced a correct identification. That must have happened everywhere that summer – but not in Michigan. 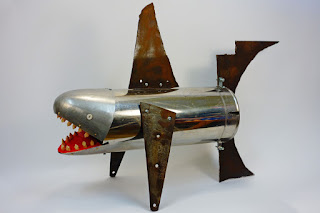 As well as:
·    Old bone buttons (sewn on for eyes)
·    Handcrafted and sharpened dowels (teeth) in a red mouth
·
Built like a torpedo or a giant submarine, with vacant eyes and a red ripping mouth, my great white shark is “no boat accident!” either.
Posted by Unknown at 7:22 PM No comments:

I was raised in Kalamazoo, MI. It may sound like an old fashioned cliché, but one of my favorite childhood memories is capturing fireflies in a Mason jar. During the intense heat and humidity of those Michigan summers, it was a great treat to play outside in the coolness of the evening. After awhile, the fireflies would begin to wink on in the bushes.

In flight, they always looked like bits of snow to me – the way big dry snowflakes look on a winter’s night under a streetlight, drifting around, never falling to the ground. Fireflies are pretty ordinary looking winged beetles, except that they contain a bioluminescence during twilight that attracts mates or prey – children, of course, would fall into the latter category. Also called lighting bugs, they are slow moving and easy to catch. After a while I’d release them back into the canopy of trees and lush foliage… only to repeat the game the next evening.

This is my first firefly – I don’t know why I didn’t make one sooner! It is the “F” in my 2016 Felix Kulpa show. I am happy that it does indeed express all the “fireflyness” of those magical creatures in my Michigan backyard.

The materials are simple:
- A body of redwood rounds
- Silver-colored shoe tree wings
- Twisty wire legs
- Copper tipped antennae
- A child’s orange Japanese Oak croquet ball from a shop on Whidbey Island, WA
- An old Mason jar that belonged to my father-in-law...
It has a light inside the jar, casting an orange glow from under the wings

My firefly has some good forward movement, too – helpful to find a mate or get away from Michigan kids with Mason jars.
Posted by Unknown at 8:56 PM No comments: